History of the Library

At the beginning of the 20th century, the citizens of Alden launched a campaign to convince Andrew Carnegie to help fund a library.  Alden was too small to meet the population requirements for such a giant, but the interest and support of the citizens persuaded Carnegie to make an exception.  Throughout the years, the people of Alden have been dedicated to providing information, technology, and recreational materials for a diverse population. In April of 1882, the first Library association in Alden and the State of Iowa was organized.  By 1892 a group of Alden women had managed to establish a library in a storefront and in 1911 they persuaded local government officials to support it with tax money.  This support gave Alden its first free public library.

Shortly after the library became public, H.E. Button contacted Carnegie officials.  Towns less than 1000 people were not usually accepted in this program, but the fact that Alden served a large rural community allowed Carnegie to make an exception.  In November of 1913, the Carnegie Cooperation offered Alden $9,000 for a new building if local officials would agree to provide a suitable site and to support the resulting library with $900 per year.  This is how the present building was built.

In June of 2000, the city of Alden completed a two-part proposal to expand and renovate the library.  The first part was to renovate the present facility to increase usability while preserving the historical integrity of the building.  The second part was to add an addition that would not harm the aesthetic quality of the unique old building. The addition is an L-shaped space containing 3,000 square feet.  Part of this space is utilized for programming including the after school and summer reading programs.

The Friends group was formed in 1996 with two purposes in mind.  First was to garner support for the library and second was to help with fundraising for the proposed library project.  The group meets quarterly and holds an annual meeting every June.  The group sponsors National Library Week (book bags, bookmarks, and free books) and has purchased several items for the library.  In December of 2000 they held their first annual Holiday Festival of Tables, a very successful event.  In the Spring of 2001, Friends President Marcia Hovinga wrote a successful grant to receive funds to convert over 400 slides of early Alden history to video.

Dr. Doane became involved in the management and growth of Iowa Limestone Company (now called ILC Resources) in the early 1930's.  She was the first woman to graduate with a doctorate from Drake Medical School in ear, nose, and throat practices.  Dr. Doane established the Grace O. Doane Foundation, a scholarship in her name through Drake University and St. Francis Hospital of Mountain View, Missouri before her death in 1980.

The original library was built in 1914 with a $9,000 grant from the Carnegie Foundation.  The Library was placed on the National Register of Historic Places in 1966.  In 1997, a $250,000 Bond Referendum was passed.  In 1998 the City hired American City Bureau to do a feasibility study, and Terry Hinrichs of General Development Group was hired for fund raising.  A capital campaign was started to raise $550,000 for an addition that would double the size of the library, and renovation of the existing library.  In January of 1998 the library received $250,000 from the Dr. Grace O. Doane Foundation, which turned our “dream” into a reality.  On August 26, 1999, the 85th Anniversary of the ground breaking of the original building, the library held a ground breaking ceremony.  On June 17, 2000, there was a dedication for the new library. 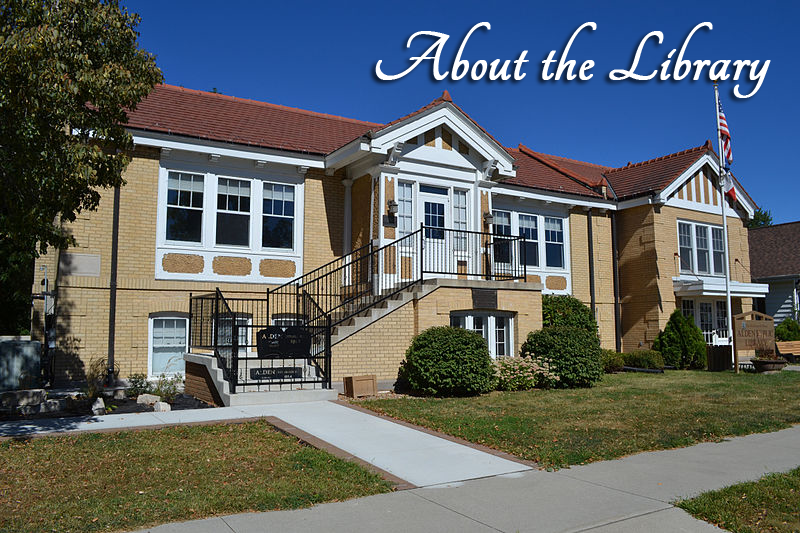 Working to enrich the lives of our patrons through education, information, technology and services.

Standing atop the palisades on the bank of the Iowa River in the town of Alden is the unique Alden Public Library. The town has the distinction of being the smallest community in America to receive a Carnegie grant to construct a library, and it is believed to be one of the smallest Carnegie-endowed libraries ever built.

Although small in stature, the library collection boasts over 13,000 volumes, including books, books on CD, large print books, graphic novels, magazines, newspapers and DVDs as well as access to the Hardin County Newspaper Archive.